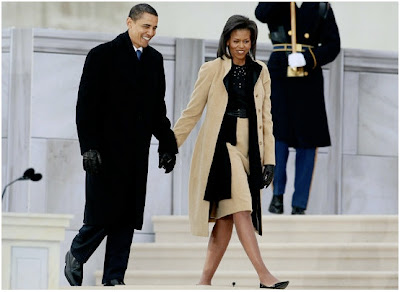 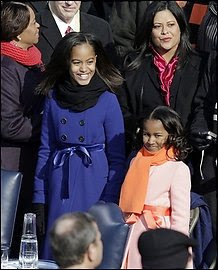 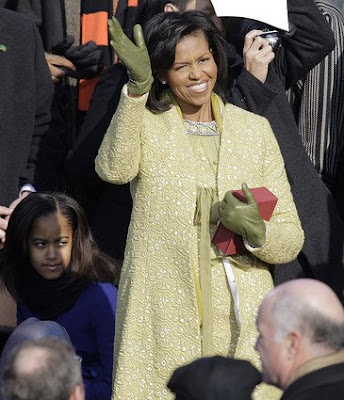 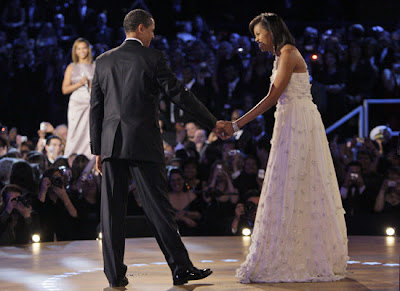 Jan 20: Originally from Taipei, Jason Wu at the fresh age of 26, is rising American Fashion Ingenue.
So what does all this silk chiffon and lamé brocade translate into politically?

hile each of Michelle’s inauguration designers was American, two were immigrants, and one was a first generation son of immigrants. All of the designers were small, independent shops. Whatever they lacked in common notoriety; they made up for in uncommon vision. Obamamerica is still an opportunistic melting pot, ready to bless internationally grown talent and industry.

Second, Lady Obama’s choice of a

26 year old fashion prodigy for her inaugural ball gown, the zenith of political fashion, speaks to the first couple’s faith in American youth. The 18-30 year old demographic not only hosted the hottest of the ten inaugural balls, but had shown up in droves to elect her husband.

Third, inaugural fashion is always hopeful, but the modern elegance of Michelle’s sunny yellow brocade prophesied of brighter days to come. The innocent romance of her floor length, ivory gown nodded to the blank slate the Obamas hope to lead American into over the next four years.

Real life starts tomorrow, but for now, see if you can s 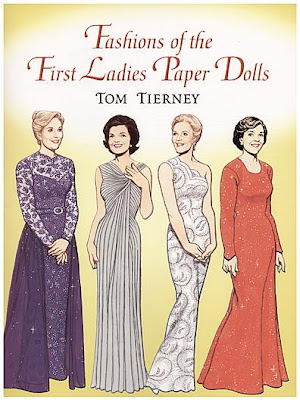 The inaugural gown is not designed to clothe the first lady, pretty as she is. This frock belongs to Lady Liberty. It is an ornamental flag signaling to these fifty United States (and beyond) the grand vision of incoming leadership. Far from being haute couture, majority rules in inaugural styles. The garment should gain the vote of the preponderance of Americans. This rite-of-passage dress is basically the wedding gown of a presidency, and it’s image is fixed in amber. Or at least Richard Martin, curator of the Metropolitan Museum’s Costume Institute, said something smart like that. But if you don’t trust him or his fancy title, follow me down below.

Okay, so Americans have liked fashion from US Genesis. George W. the First was a fastidious dresser. He didn’t dress himself, because that’s just incongruous, but he did pick out his own fabrics, trim, and silhouette. He believed a gentleman of integrity should take great pride and care in his dress. Do you hear that fine Americans? President Washington said “It’s unconstitutional to wear yoga pants and flip flops to the grocery store.” 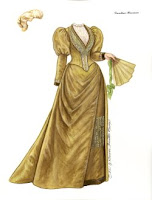 But back to the dress, Caroline Harrison, wife of 23rd President Benjamin Harrison, was the first little catwalker of her time. Following the rallying call of her husband to “buy American,” she found an Indiana artist to design the silk and a New York City dressmaker to sew up her gown. In the end it was fashion candy, fancy enough to make the Whigs, Fedarlists, and the Union Party proud, if only the memory of them remained. Then there was Teddy Roosevelt’s wife, Edith. She practically invented green fashion. To make a statement about preservation and conservation she reused the skirt from an existing dress and topped it with a new bodice. I bet Eleanor, wife of depression defeatist Franklin Roosevelt, learned a lot from Aunt Edith.

Now, once those WWII soldiers came home, got married, and started having babies, we got Mamie Eisenhower’s pink Dior beauties. They were fresh, innocent, hopeful. This little fashion plate led post-war America into the fifties with her signature narrow fringe of bangs and a love of what came to be called “Mamie Pink.” 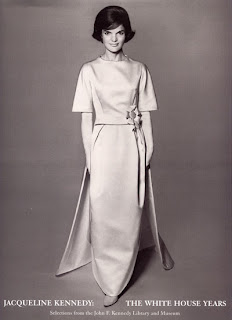 When the Kennedys moved into the White House, the Capitol became Camelot. The fantastical New Vision that included shooting man to the moon required inconceivable American fashion, possible only through the likes of Jacqueline Lee Bouvier Kennedy. She wore a white satin number with a cape of her own design to the inauguration gala. But more about her ladyship later. 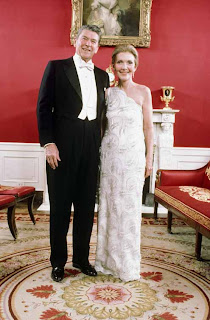 Movie Stars Ronald & Nancy Reagan brought glamor and the white tie back to the White House. And then everyone complained that they were too extravagant for a democratic nation. Well sillies, the Reagans were Republicans, but they did scale back to a black tie affair in the second term with not as chichi china and not so lavish linens. 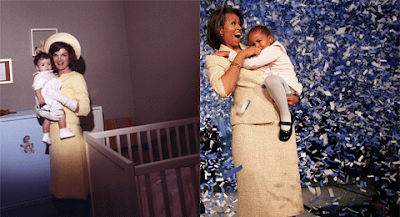 So what will Michelle Obama wear? Many have compared Michelle O to Jackie O. True they did both stand almost 6 feet tall, and leaned toward clean, sophisticated shapes. But the message behind Michelle and Jackie’s wardrobe couldn’t be more different. While Jackie lived in a castle in Camelot, Michelle is moving into Sherwood Forest. Michelle buys what she wears, commonly off the rack from retail establishments that everyday Americans can afford. Jackie was gifted gowns from the likes of Valentino and Givenchy that some cities couldn’t afford.

The 2009 inauguration is expected to have over 1 million attendees with neighborhood balls and donated gowns for guests you aren’t accustomed to gala life. While each of these preparations speaks volumes, the closing statement about the Obama administrations plans will be summed up in the frock Lady M.R.O. chooses to wear.

Now go put something pretty on and change the world!